Despite not being a Championship Formula One race, this was a very significant race for BRM. After the disappointment of Silverstone on 26th August 1950, the P15 V16’s second race meeting at Goodwood a month later was considerably more encouraging and despite very wet conditions, Reg Parnell won not only the minor Woodcote Cup but also the full Formula One Goodwood Trophy later that same day. Despite starting the race 7th on the grid, Parnell raced through  the field to beat Prince Bira in the Maserati 4CLT/48 and despite the atrocious conditions, demonstrated the potential of the V16.

A significant race for several reasons: the race was won by Swedish driver Joakim Bonnier driving the P25 which, despite early reliability problems in development, began to perform just as there was a concerted move to rear engine cars. It would be the only World Championship victory of Bonnier’s fifteen-year Grand Prix career and it was also the first win for the Owen Organisation, the race team of BRM, after almost a decade of effort. Bonnier led from start to finish and won by fifteen seconds over Australian driver Jack Brabham driving a Cooper T51, to become the first Swedish driver to win a Formula One Grand Prix.The race was held over 75 laps of the four kilometre circuit for a race distance of 314 kilometres. 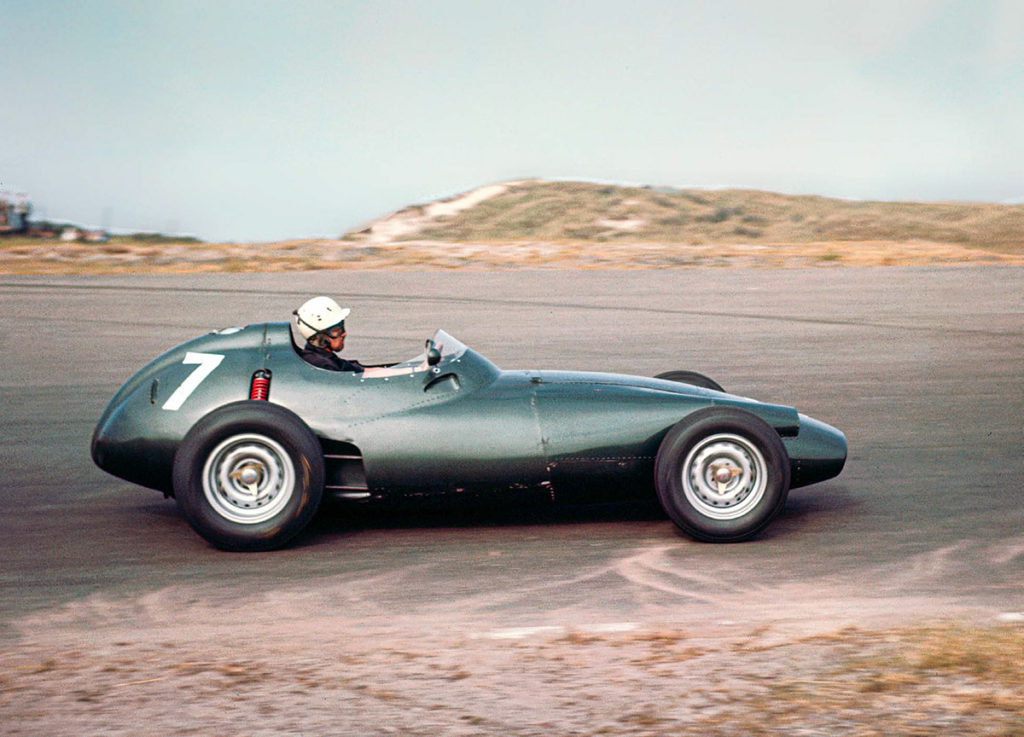 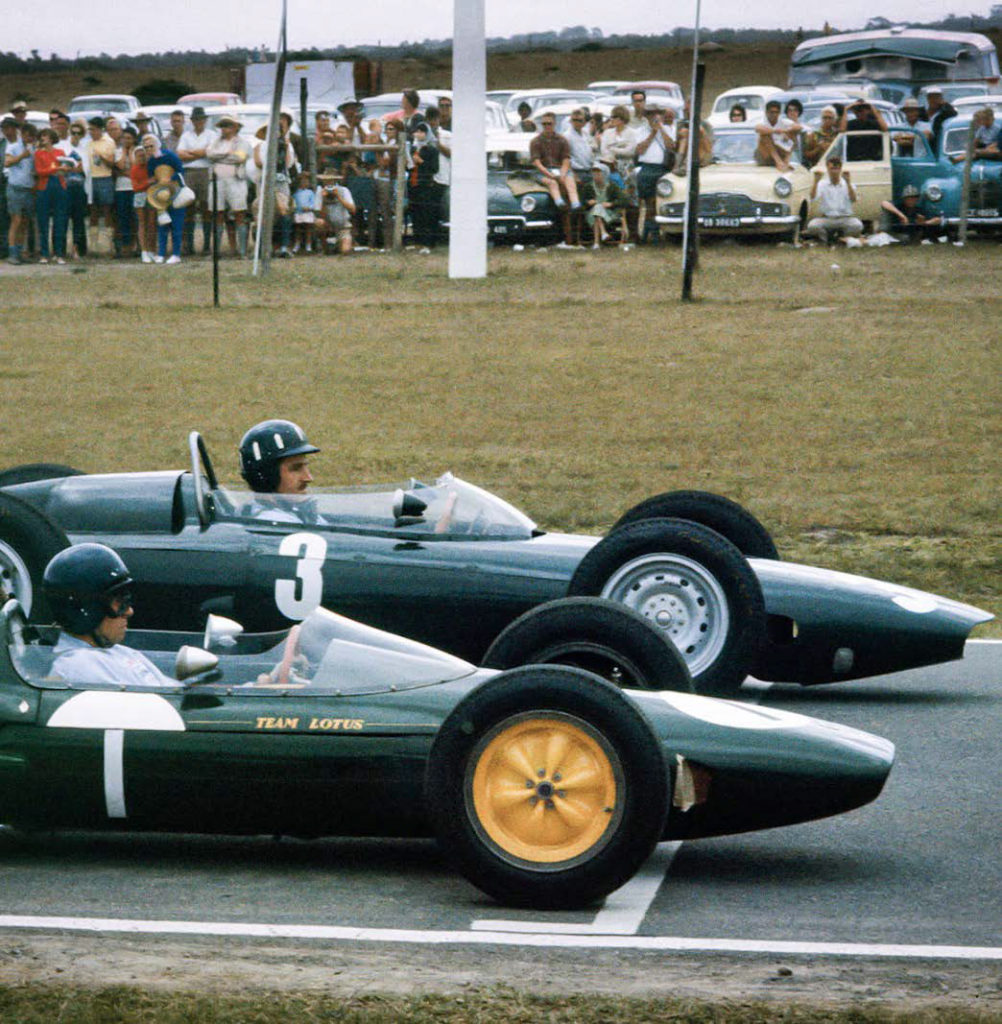 Held at the Prince George Circuit in East London, this was the final race of the1962 FIA Formula One World Championship, The race served as the Championship decider, with either Graham Hill or Jim Clark set to leave South Africa with a maiden Formula One crown. It had been advantage Clark after qualifying, with the Scot claiming pole in what was the biggest sporting event ever to be held in South Africa at that time. At the start it was the Lotus that led into the first corner, with Clark immediately setting fastest lap as Hill ran in second.The Scot put together a dominant display to pull ever further ahead of his rival, and with a quarter of the race to go the title was in his hands before an oil leak cruelly ended his race. Hill inherited the lead and twenty laps later was officially confirmed as World Champion, having pulled clearly ahead of Bruce McLaren.BRM also completed a double by winning the Intercontinental Cup for Manufacturers. Raymond May’s vision and dream announced at Folkingham Airfield 13 years earlier had finally been realised and with a team never exceeding 120 people, BRM had won the World Championship, in a car designed and built in Britain with all British components and with a British driver.

Monza has a habit of producing classic races and arguably the zenith was a BRM victory 1971, with Peter Gethin beating Ronnie Peterson by 0.01 seconds. The top five were separated by just 0.61 seconds, with François Cevert finishing third, Mike Hailwood fourth and Howden Ganley fifth. For Gethin it was all or nothing: “From the start of the race I just revved that V12 engine 500 rpm over its normal limit all the time,” he said in 1983. “I can honestly admit that I didn’t think it would last to the finish. Jo Siffert had a more powerfully developed engine in his BRM and that extra power broke his transmission, so I wasn’t optimistic.” It was a race of 25 lead changes, the final one as late as the very last corner, Peterson entering it ahead of Cevert, followed by Gethin and Hailwood. Gethin: “On the final lap I dived up the inside at Parabolica. The car started to slide and I piled on the opposite lock, telling myself ‘don’t  lift, don’t lift’ and I came out of the corner first. I knew as long as I didn’t fumble a gear change I could get to the line first, but Ronnie  was surging up on me and passed me 20 feet after the flag. I knew it was going to be really close, so I waved my arm in triumph, not because I was showing off, but I reckoned that as this was Italy, and they might not be too clever on their timing, the chances were  that they’d give the win to whichever driver raised his arm!” 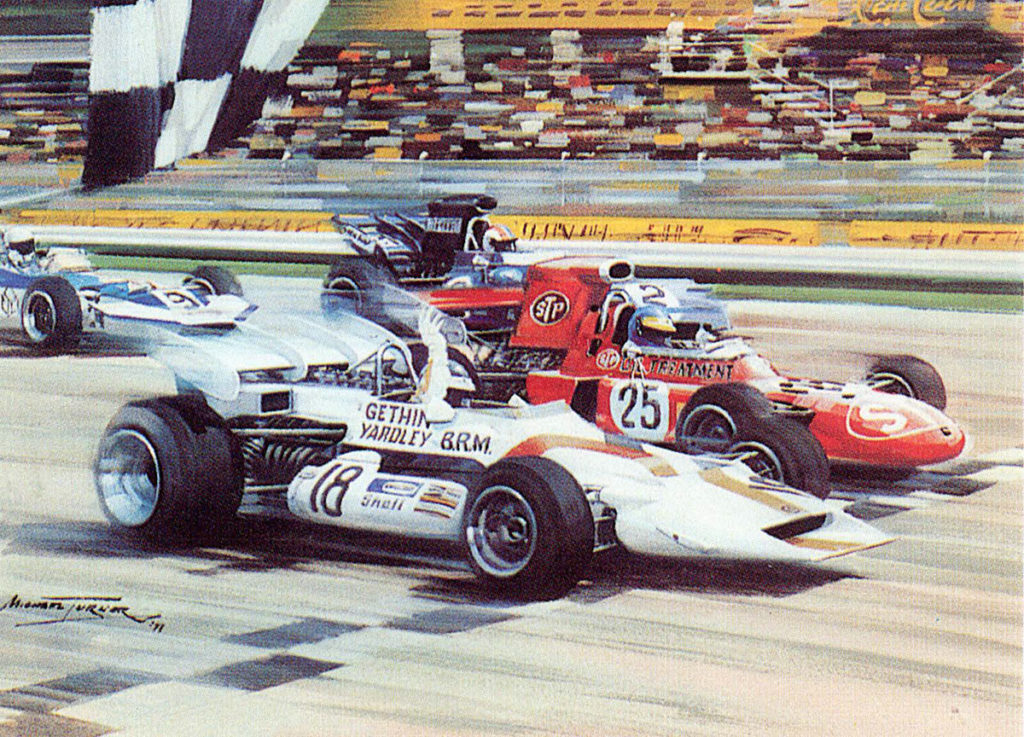