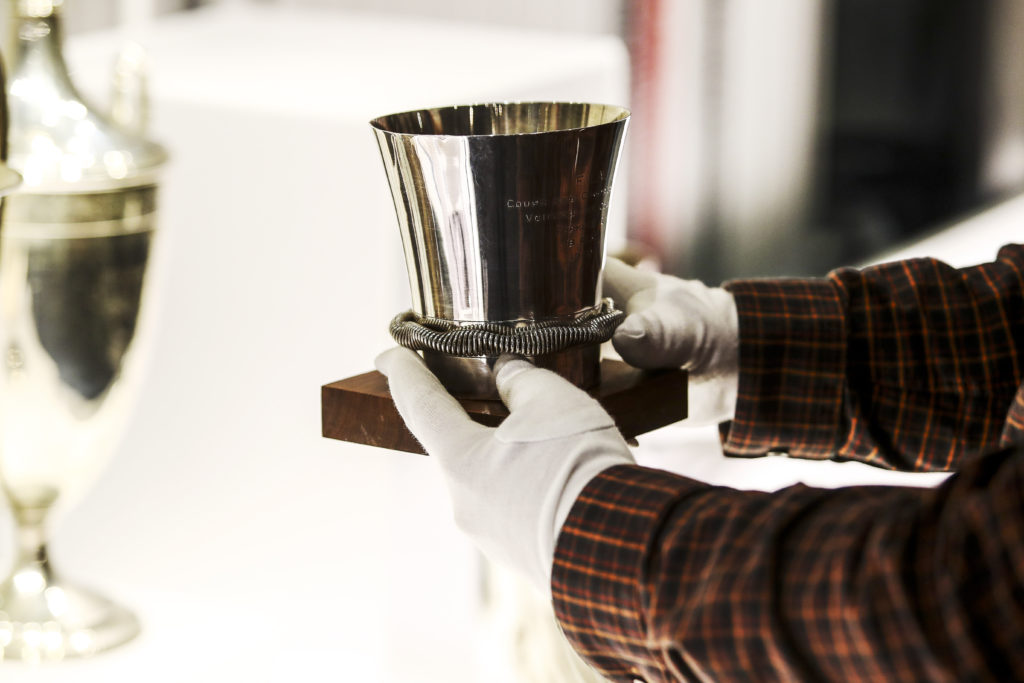 For decades, four of BRM’s trophies were on loan to the Bourne Heritage Centre museum, in the Lincolnshire town in which BRM was based, but recently have been moved to Silverstone for display in time for the Silverstone Interactive Museum‘s re-opening on the 17th May.

Among the trophies are a number of highlights in BRM’s racing career. Arguably the most important in the collection is the 1962 World Constructors’ Championship trophy, a real victory for both BRM and Britain after Graham Hill won the championship in the P57 following a season long battle against the revolutionary monocoque Lotus 25 driven by Jim Clark.

Given the collection’s new home at the Silverstone Interactive Museum, it is only fitting that a number of trophies are victories at the Silverstone circuit. There are three wins in the prestigious BRDC International Trophy, sponsored by the Daily Express, from 1957 (Jean Behra), 1962 (Graham Hill) and 1965 (Jackie Stewart).

Described by one of the world’s most eminent racing historians, Doug Nye, as “probably the finest archive in motor sport”, the BRM archive contains the entirety of our history, from race contracts to scrapbooks, from photographs to press cuttings, and over 20,000 technical drawings that are influencing the new build today. The entire BRM identity is being carefully documented and digitised, ready to be shared with the world later this year.

We would also like to thank the Bourne Heritage Centre for their careful and thorough custodianship of the trophies for the past decade – it’s been brilliant to have had them on display in a town with such a rich BRM heritage.

Premium motoring Magazine, Magneto, have also recently written an interesting article on the BRM archive in their Issue 10: Summer 2021 edition. We encourage any BRM fans to peruse for more insight!