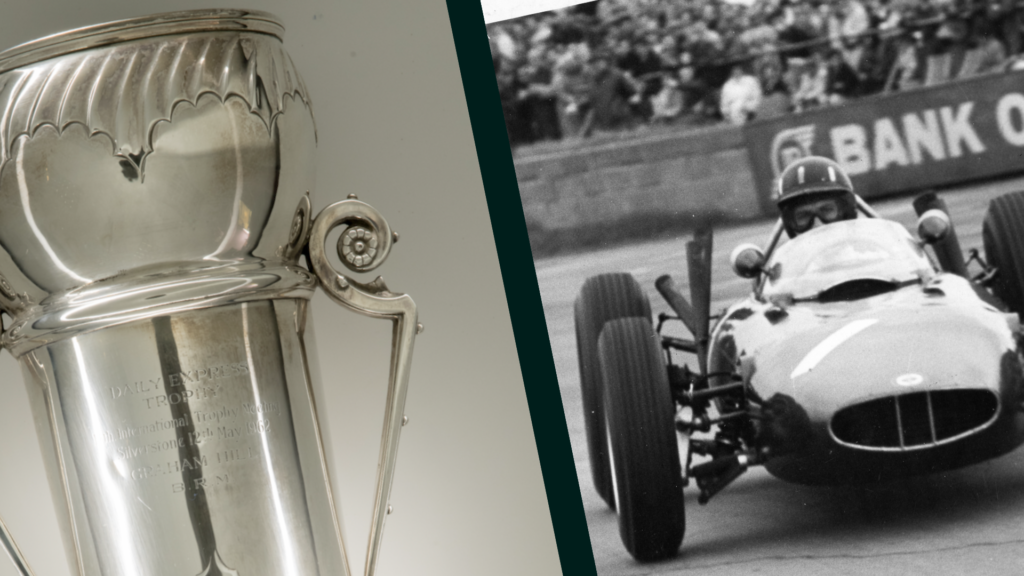 The 14th BRDC International Trophy was a motor race, run to Formula One rules, held on 12 May 1962 at the Silverstone Circuit. The race was run over 52 laps of the Silverstone Grand Prix circuit, and was won by British driver Graham Hill in a BRM P57.

1962 was a fantastic year for Hill, seeing him win the World Championship, of which his victory in the 14th BRDC International Trophy was a contributing factor.

Known for his wit and charm, Hill became synonymous with BRM and Formula One World Champion twice, winning in 1962 with BRM in the P57 ‘Old Faithful’ and in 1968 with Lotus, as well as being runner up on three occasions with BRM in 1963,1964 and 1965. He won in Monaco with such frequency in the 1960s (5x; 1963, 1964, 1965, 1968, 1969) that he became known as “Mr. Monaco”. Hill went on to become of the finest drivers of his generation and perhaps the greatest achievement of his career was becoming the first and only driver (to date) to win the Triple Crown of Motorsport – winning the 24 hour Le Mans, Indianapolis 500 and the Formula One World Championship.

A huge thank you to Silverstone Heritage Ltd for sharing these images from the British Racing Drivers’ Club (BRDC) archive, giving a flavour of the bustle and excitement that went on behind the scenes at this infamous race.

Watch a snippet summary of the 1957 race at Silverstone, documenting the key highlights of BRM’s victory. The film also provides a brilliant insight into the enthusiasm and passion everyone had for the BRM team, and there is a palpable excitement in seeing a quintessentially British car triumph on British soil.