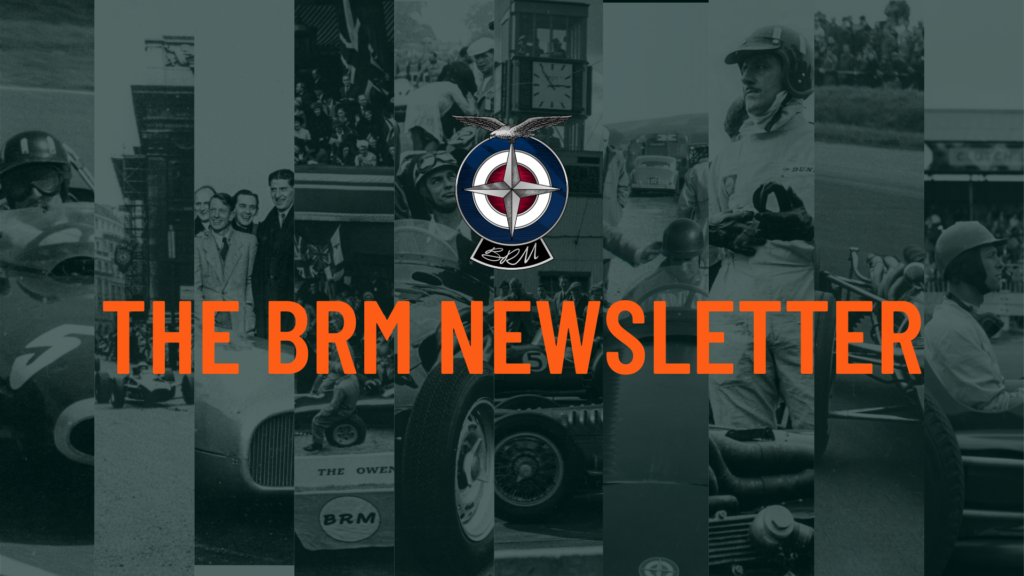 Welcome to BRM’s newsletter, and more importantly, welcome to the BRM family. It’s an incredibly exciting time for us, and we’re thrilled to have you along for the journey!

On Easter Monday, 1953, at Goodwood Motor Circuit, two BRM cars raced for the first time under the aegis of Alfred Owen. Ken Wharton set a new race and lap records, winning the Richmond Formule Libre race by a full 6.0 seconds.

Born 4th April 1940, Richard Attwood, a driver for BRM and an owner of a BRM P261 (which he often takes to Goodwood Revival!). His brilliant Grand Prix debut at Monaco in 1968, which saw his BRM finish second to Graham Hill’s Lotus 49, has ensured Attwood’s place in the F1 record books. Happy Birthday from the BRM family!

At the engine re-build garage, Hall and Hall are making spectacular progress, and are currently building the new Rolls Royce Supercharger. The car’s chassis has been assembled, and some body work has been completed, allowing the iconic car to really begin to take shape.

BRM Past: BRM at the 1951 Silverstone Grand Prix

70 years ago, BRM drivers Peter Walker and Reg Parnell raced in the Grand Prix at Silverstone alongside 20 of the world’s fastest cars, for a 90 lap, 260-mile course. Racing in two BRM 15 1.5 V16s, the team had arrived at the last minute, and so Walker and Parnell had not practised, or even qualified, for their debut race, starting in 19th and 20th position respectively.

The race was incredibly fierce, and despite the fact both drivers were suffering from hand and feet burns, they eventually finished in fifth (Parnell) and seventh (Walker).

Upon their finish, BRM were said to have ‘high hopes of success’ in the future.

5 years in the planning, over 70 years since the first V16’s debuted on a racetrack, some 46 years after the last factory manufactured BRM started an F1 race, British Racing Motors is re-awakening.

The Re-Awakening film was viewed over 300,000 times across all digital channels in the first week, and shared across major automotive publications including Evo, TopGear, Petrolicious, Sunday Times driving, and many more.

It is undeniably an incredibly exciting time for BRM, and we want to thank everyone for the overwhelming amount of support we’ve received, and invite you to come along on this journey with us.

From the 8th – 11th of July, BRM will feature at this year’s Festival of Speed, with a selection of grand Prix of Formula 1 winning cars being put on display in a dedicated BRM area in the paddock.

Perhaps most exciting of all, twice a day the legendary V16 will be fired up, allowing those present to witness the roar of this infamous engine for themselves.

Want to get these updates in your inbox? Subscribe today!

British Racing Motors has entered a new era – 5 years in the planning, over 70 years since the first V16’s debuted on a racetrack, some 46 years after the last factory manufactured BRM started an F1 race, BRM is re-awakening.

Our mission is to celebrate and convey the BRM story authentically. The Owen family continue to hold this famous marque in trust for the nation, and we invite you to join us on this journey.

We’ll be sure to bring you the latest BRM news, directly to your inbox, keeping you up to date with the exciting projects and announcements on the horizon.